Come away, O human child! To the waters and the wild
With a faery, hand in hand,
For the world’s more full of weeping than you can understand.

~from “The Stolen Child” by W.B. Yeats

In 2010, I met a man on the streets of Delhi, who asked me for help in finding a place called Dongri. I asked him what it was, he told me he thought it was where his lost son was (!) He went on to tell me his story – that he sent his 12-year-old boy away to work, and never saw him again.

In Siddharth Mahendra supports himself, his wife, and his two children by doing what his forefathers did—fixing zippers on the streets of New Delhi. When he has difficulty making ends meet he sends his twelve-year-old son, Siddharth, to work in a factory in a distant town. The boy soon disappears, and thus begins his father’s desperate search. 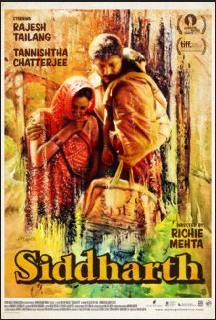 Mahendra and his wife have reason for concern. Child trafficking is a profitable business in India, with poor children being the most common targets. The abducted children are sent to work as domestics in the homes of the rich, to labour on sugarcane farms, to have their organs harvested, to beg on the streets, or to work as prostitutes. This is the dark underbelly of India’s recent economic progress.

It’s easy to condemn Mahendra for his decision to send his boy away to work, and other characters in the film often do just that. But Mahendra is a true working-class hero, awe-inspiring in his moral rectitude, dignity, and refusal to lower himself; in his search for his son he rejects the negative forecast of an astrologer and refuses to seek the help of criminal elements. Among the human examples of moral decadence that surround him, he shines like a firefly in a septic tank.

So what are we to think of his decision to send his boy away to work? For men like Mahendra, work is the thing that redeems. Uneducated and cut off from the tools of technology that might help him improve his lot in life or even to find alternatives to his present life, he sees work as the way to freedom and as the surest way to build an honest life. In this he is no different from my grandfather and many of the people from my rural Canadian village, people who didn’t see the point of education because they were so cut off from a world in which education mattered.

While Mahendra desperately tries to find his beloved son people respond to his questions with the most astonishing remarks, such as, “It’s you who sent him away. If you can’t find him, just have another one.”

A street kid with fearfully dead eyes remarks: “Maybe he got lucky and left this world.”

The film also brings another truth painfully home, and that’s how in impoverished regions of the world advertising is an ugliness that can’t be escaped; every wall promotes fetishes to be grabbed and idols to be worshipped, and desperate little hole-in-the-wall shops are decorated with massive posters of the beautiful life awaiting the affluent consumer.

What enabled the Pied Piper to steal the children of Hamelin? For one thing, the beautiful sound of his flute—in Siddharth, and in the frighteningly real situation it portrays, children are taken not by force but with promises of money, treats, beautiful clothes, and other highly valued commercial goods. Because this is what their society is constantly marketing to them and what they see their parents working so hard for, the children are sitting ducks waiting for a tempter to lead them to their doom.

Recently Richie Mehta was kind enough to answer some of the Mindful Bard’s questions about filmmaking, art, and compassion.

What elements in your childhood and early years pointed you toward film?
It was a combination of things, really. As a young child, I just loved watching films, more so than even my avid, film-loving parents. I would absorb material related to film (who shot this, who scored this, who was that supporting actor in that film) before I could do my multiplication tables.

That told me something. And from that point, when I realized what a film was–that people made these things—I was fascinated that my emotions were being manipulated so clearly. How was this possible?

When I was 16 I went to India for the first time (being born in Canada with an Indian background). I spoke Hindi, so I could communicate. But I was so shocked by what I saw, by the fact that this world had far more pain and suffering than I knew of, and that I–by virtue of being raised in Canada–was part of the elite (which didn’t sit well with me).

It was a real shock to my system, and I said I wouldn’t go back to India unless I could address some of this. But it gave me perspective. It made me take advantage of every opportunity that came, both in my personal and professional life. And to this day it’s reduced my ability to take anything too seriously unless it really warrants it (such as social, economic, and environmental issues).

Fast forward a few years. After I had studied art and filmmaking, I saw a film in 2005 called Shooting Dogs, about the Rwandan Genocide. I was skeptical going in, thinking it would be too melodramatic. By the end, I was a mess, crying more than I ever have. The film was so successful in making me feel and understand the tragedy that I realized that this was the power of film: to make you empathize, to make you feel compassion, and to subvert our normal apathy.

Combine these incidents, and voila, you have me making these types of films.

What was your most beneficial educational experience? What or who in your training had the most—and best—influence on you, as a filmmaker and as a human being?
This is a tough one. I’ve had wonderful teachers all through my life, many of whom I’m still in touch with, from high school to university to post-grad to mentors in the field. My film professors, my art teachers, my English teachers, even a science teacher I once had (who told us, If you fail to prepare, prepare to fail) have all made a difference.

I will say that every time I go to India, I learn more—about myself, about humanity, about our capabilities as individuals and as a collective. It constantly reminds me of how we can survive in close quarters, with too little resources for too many people. And I will say, I’m always moved at both how remarkable we are and how terrible we can be.

What was the most mesmerizing experience for you while making Siddharth?
The initial inspiration–meeting the rickshaw wallah who told me he had lost his son, a man who didn’t even have a photograph, or even the ability to search for his son, as he had to work for the rest of his family. It shook me to the core, and inspired everything that came afterwards.

Did anything funny or strange happen on set?
Many things. When so many people are working towards a common goal or vision, it’s amazing what can occur. You just have to be completely open to grabbing it. There’s one scene where Mahendra is at a railway crossing, and walks from the bus to the crossing, only to be stopped by the passing train, before he goes off for a little walk. It all happens in one shot, with the train racing by perfectly. That was all an accident, there was never supposed to be a train passing in the scene. But it occurred, we captured it, and it was–in my estimation–magical, and related to the meaning of the film itself.

Why did you decide to present the tragic circumstance of child-trafficking from the perspective of the parents as opposed to that of the kidnapped child?
Because we’ve seen the child’s perspective in numerous films and documentaries. That doesn’t mean it’s not worth repeating of course; it’s an issue that still needs to be addressed at a high level. But I met a parent who lost a son, and I wanted to share his story—his emotional resilience, his economic limitations, and ultimately, his ability to cope when faced with no choice. And I wanted to show how the world around him showed him compassion. That’s the world I know and have experienced, despite these tragedies. I have to believe people are like this, deep down.

Have you been rebuked for portraying an unfavourable aspect of Indian society today?
Actually, I haven’t. I was accused, by one Indian publication, of portraying Indians as being too nice! I’m proud of that. But generally people–even in India–who have seen this have come away experiencing people in a compassionate light. The main character is surrounded by friends and family who really care, and at worst, strangers who may be indifferent. But also keep in mind that I’m not showing people in abject poverty. They have a roof over their heads, so this is not the bottom of the economic ladder.

Do you have any thoughts on how film can be healing and a catalyst for change?
Of course. My favorite films have all done just that for me, and I think it’s a very powerful tool for emotional awakening as well as plugging in to people’s conscious and sub-conscious minds. If done right, films can become experiences for people, and as potent as any memories in their lives. That’s a very powerful tool.

Do you see Siddharth making enough waves in India to mobilise the country to stop child-trafficking?
I wish I could say yes. But there are so many issues to address there, and indeed, reflective of issues all over the world. To me it’s all about economics. Child traffickers would not do this if it was not profitable–one of them even told me so when I was researching this film. So it’s a higher level problem that must be addressed elsewhere, by people reading this article I hope. India, like so many other countries, would follow suit with positive change if the benchmark was set over here.

Are there any books, films, or albums that have deeply influenced your development as a filmmaker?
Many. Mostly films. Gandhi is one that really changed the course of my life. As did Shooting Dogs, as I mentioned earlier. And Michael Mann’s The Insider. All of these, and many others, have pointed me towards wanting to not only be a better person, but to be more aware of the effect we have on others and the world.

What are you working on now, and what’s your five-year plan?
I’m working on a project about policing in India. How difficult it is to maintain law and order, and why. It’s a very complex issue, relating to colonialism, to economics, and to maintaining a terrible status quo.

If you had an artist’s mission statement, what would it be?
I think it’s to wake people up. To make them realize their own potential and that they have the power to change things for themselves and for others. Blind complacency will prove destructive in every way for us.