Here in the north each night is a whole winter long. Yet the place is fair enough, doubt it not! Thou shalt see sights here such as thou hast not seen in the halls of the English king. We shall be together as sisters whilst thou bidest with me; we shall go down to the sea when the storm begins once more; thou shalt see the billows rushing upon the land like wild, white-maned horses—and then the whales far out in the offing!

~Henrik Ibsen, The Vikings of Helgeland

Ensemble Polaris claims to have been created for the purpose of exploring the ‘idea of north,’ something on the minds of many thinking Canadians, being the title of a CBC Ideas program series by Glenn Gould, first broadcast back in 1967; the series was not so much an effort to define what constituted ‘northern’ culture as an attempt to communicate a way of seeing common to the experience of artists in northern countries.

Ensemble Polaris was formed in Toronto in 1997 by professional, classically trained musicians from a number of different nationalities (many thanks to the Tafelmusik Baroque Orchestra and Chamber Choir for being the spawning ground and meeting place for at least half of these superlative artists). You’d expect this kind of ethnic mix from one of the most cosmopolitan cities in the world, nearly half of whose residents were born in other countries. Canadian culture is much the richer for it.

Ensemble Polaris is a rare gem, presenting the listener with a truly seamless musical eclecticism. They almost appear to have launched a new genre, pure and all-of-a-piece.

It’s the kind of music you’d expect to hear in Valhalla, complete with every musical genre that the Vikings may have encountered on their journeys. There are also touches from the Parisian, East European, and Northern Arabic music of the last two centuries.

The excellence of arrangement and performance is enhanced by an avant-garde adventurousness and an aesthetic that’s both classical and folk, as primal as it is postmodern. The diversity of this music harks back to the patchwork culture of the European port cities that admitted all manner of sights, smells, and sounds from the cities of the world.

Whatever possessed a bunch of musicians to come together and make music based on “the idea of north?”

According to Colin Savage, it was both an organic process and an idea whose time had come. This may be why the group found it so easy to stay together and to thrive musically.

Says Colin: “In 1997, the first Northern Encounters Festival took place in Toronto, bringing choirs, musicians, and composers from Scandinavia to collaborate with Canadians in an exploration of circumpolar music. The Toronto Symphony Orchestra conductor at that time was a Finn, Jukka Pekka Saraste. The CBC was involved in presenting and broadcasting concerts of ensembles large and small, and they had a slot for a local chamber group.

“Alison had been interested in Scandinavian folk music for some time, so she assembled a group of simpatico players on an unusual combination of instruments; the musical result was intriguing, both to us and to the audience. The membership of the band has changed very little since then. Colleagues often ask if they can join us because we seem to be having so much fun.”

The group has since expanded its repertoire to include songs from Mediterranean countries and compositions from group members, but Scandinavian repertoire is still a mainstay.

. . . And a Peculiarly Northern Background

Alison’s talent for envisioning and organizing artistic projects was no doubt inborn, but might also owe something to a childhood that was both stimulating and supportive of her special musical gifts.

“My parents moved around a lot when I was a child,” she says, “so although I was born in Toronto I lived in Calgary, Winnipeg, Barrow-in-Furness in northwestern England, London, and Toronto again before I turned ten. I began playing recorder as an eight-year-old at school in London. Apparently I jumped at the chance to play the same ‘flute’ that my Uncle Bill played.

“I loved being able to play music for myself, and had an eclectic bunch of favourite tunes, from English folk songs to an aria from Handel’s Judas Maccabeus. I started on flute in junior high school when I was back in Canada. As far as help and guidance along the path goes, there were many inestimable gifts of encouragement from my teachers at each step along the way.”

How does such a large group of maestros select what tunes it’s going to play? 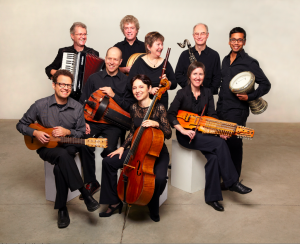 “Various members of Polaris,” says Colin, “work in genres ranging from historical performance of medieval, renaissance, and baroque music; to experimental electro-acoustic; to Celtic/folk; to contemporary classical ‘art music’; to traditional music from the Middle East, Turkey, the Balkans and south Asia; to symphony orchestras.

“With such a wide variety of musical tastes and experiences, we’re always on the lookout for new material that would suit our aesthetic. Some members bring folk tunes from traditional sources (aural or written collections), some of us write original music for the band, and others arrange tunes from the diverse sources listed above. Often the arrangements are a collective enterprise, with a lot of experimentation and subtle adjustments over time until we feel we’ve found the right sound to convey the character of a given piece.”

How to Be in a Group

Says Alison: “Playing with a good group is inspiring, challenging, and rewarding because it asks the most of you and can bring out your best. I once had a teacher who regularly said, ‘Always strive to be the worst in your group,’ which is a slightly odd way of describing the great opportunity you have when playing with colleagues you greatly admire and respect.

“Playing with Polaris is very much this kind of experience. Scheduling rehearsals and such can sometimes be a challenge because everyone has very busy lives, but we always manage. Playing with a group obviously requires more compromise than going it alone, but the old saying that ‘The sum is greater than the parts’ also applies.”

Alison’s early musical influences were rich in quality and manifold of genre. Some of her earliest musical memories include hearing tunes from musicals and oratorios in family singalongs around her aunt’s piano. “As an older kid and teenager I listened to a lot of rock ’n’ roll on the radio; but I also played Renaissance consort music from the age of 11, woodwind and baroque chamber music throughout my teens, and everything from Bach and Strauss to Sondheim and Gilbert and Sullivan in community orchestras, bands, and musicals. I feel lucky to have had such a smorgasbord of a musical diet!”

The baroque orchestra Tafelmusik, where several of the members of Ensemble Polaris work as freelance musicians, is one common ground for many of them. “We had previously met one another doing other projects, “some of them in the early music scene,” Colin says. The willingness to be flexible in playing style and to explore different instrumental sound qualities, common in both the historical performance world and the “New Music” world, has been a very useful attribute in Ensemble Polaris.

You’d think it would be hard to please musicians with such stimulating backgrounds, but performing with Ensemble Polaris is no snooze. “Speaking for myself,” says Colin, “playing with Ensemble Polaris (along with performing Mozart operas on period instruments) is the most fun I have playing music. The realities of making a living as a musician require that we all do a lot of projects outside the group, but we do set aside several time slots every season for developing new repertoire, concerts, recording, and touring.”

One of the most delightful characteristics of Ensemble Polaris is the group’s serious but playful approach to repertoire. Colin divulges one idea: “a concert of music related to games, including our version of the Hockey Night in Canada theme (an iconic Canadian TV theme) and a potential Christmas CD, following the success of our ‘Not the Nutcracker’ program last December, which included Russian folk tunes and our rearrangements of Tchaikovsky’s ballet music.

“He would have used accordion and hurdy gurdy if he’d thought of it. Who needs a celeste when you’ve got two mandolins, bass clarinet, and triangle?”

When asked about her most moving musical experiences, Alison recalls a concert of South Indian classical music she heard in her teens: “I remember being completely entranced by this music and also by a concert of my teacher years later in Basel, Switzerland. It was the grace and simplicity of both of these that impressed me; there was virtuosity when called for, too, but the focused presence of the more reflective moments was magical. I often think the world could use more of that these days.”